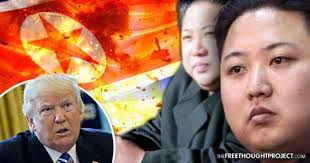 After years of threatening to carry out a nuclear attack on the United States, North Korea is finally closer than it has ever been to fulfilling its notorious threat—according to politicians and mainstream media outlets across the country. But according to one geopolitical analyst, Americans should be more concerned about the possibility of a false flag attack.

In a report for Asia Times, analyst Pepe Escobar noted that the same people who are now saying that North Korea has created a miniaturized nuclear warhead capable of fitting its recently tested ICBM are the people who sold the lie that Saddam Hussein had weapons of mass destruction in Iraq.

"Western corporate media would hardly refrain from metastasizing pure speculation into a 'North Korea has miniaturized nuclear weapons' frenzy consuming the cable news cycle/ newspaper headlines," Escobar wrote, noting that the latest rumors about North Korea's nuclear capabilities stem from a recent report from Japan's Defense Ministry that is based entirely on speculation.

"So let's look at the agendas in play. The War Party in the US, with its myriad connections in the industrial-military-media complex, obviously wants/needs war to keep the machinery oiled. Tokyo, for its part, would much appreciate a pre-emptive US military attack—and damn the inevitable, massive South Korean casualties that would result from Pyongyang's counterpunch.

It's quite enlightening that Tokyo, for all practical purposes, considers China as a 'threat' as serious as North Korea; Defense Minister Itsunori Onodera went straight to the point when he said, 'North Korea's missiles represent a deepening threat. That, along with China's continued threatening behavior in the East China Sea and South China Sea, is a major concern for Japan.' Beijing's response was swift."

Kim Jong-Un 'is in a coma and his sister is set to take control' of North Korea...

North Korea to Cyberattack US Election?

Uh Oh... What In The World Is China Doing Now??