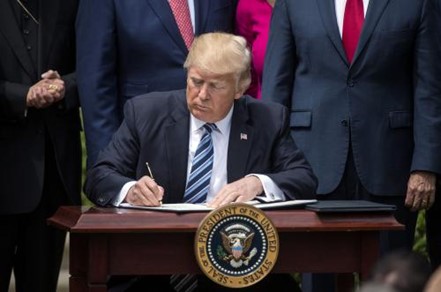 President Donald Trump has signed the sanctions bill against Russia, North Korea, and Iran. With the near-unanimous, veto-proof margin by which the so-called "Countering America's Adversaries Through Sanctions Act" was passed by both the House and the Senate, Trump was in a lose-lose position.

In the signing statement issued by the White House, Trump and his advisers tried to put a brave face on what can only be seen as a humiliating defeat. Despite some cosmetic changes...

...the bill remains seriously flawed – particularly because it encroaches on the executive branch's authority to negotiate. Congress could not even negotiate a healthcare bill after seven years of talking. By limiting the Executive's flexibility, this bill makes it harder for the United States to strike good deals for the American people, and will drive China, Russia, and North Korea much closer together. The Framers of our Constitution put foreign affairs in the hands of the President. This bill will prove the wisdom of that choice.

Yet despite its problems, I am signing this bill for the sake of national unity. It represents the will of the American people to see Russia take steps to improve relations with the United States. We hope there will be cooperation between our two countries on major global issues so that these sanctions will no longer be necessary.

To suggest this absurd, dangerous, and unconstitutional law can be characterized as representing a desire "to see Russia take steps to improve relations" with the US is the opposite of the truth.

The conscious purpose of this law is to make sure that no steps to improve ties can be taken for decades to come. In that, it will be a success. The US Deep State has boxed Trump in, there's nothing he or anyone else can do about it. Cold War 2 will almost certainly be a fact of life – for many, many years.

Unless we stumble into a Hot War between the US and Russia, which could be of considerably shorter duration...

Trump's ubiquitous critics slammed his disparagement of the bill even as he signed it. "I built a truly great company worth many billions of dollars," Trump jabbed. "That is a big part of the reason I was elected. As President, I can make far better deals with foreign countries than Congress." True of course. But this is less defiance than helpless flailing at the air. Trump is alone. He knows it, and so does everyone else.

Not only is Congress almost totally united against his foreign policy campaign positions, almost everyone in his own administration is too. Personnel selections in foreign and national security policy are overwhelmingly from the neoconservative and Republican "Never Trump" camp informally led by former losing GOP presidential candidate Mitt Romney. Trump loyalists and people who might actually agree with his campaign positions are systematically blackballed. Those getting jobs in the administration are sometimes, to the extent humanly possible, even worse than the Obama appointees they are slowly supplanting. On Russia, anyway, it seems about the only Trumper in his administration is the president himself. Even his cutoff of CIA weapons to al-Qaeda linked jihadists cannot be secure as the "al-Assad has no role in the future governing of Syria" meme returns.

In the end, Moscow has accepted the reality that "US politics have been captured by the Russophobic forces that have been pushing Washington toward the path of confrontation." While pro forma Russia continues to hold out the principle that it still "stands ready to normalize bilateral relations with the United States and cooperate on major international issues... on the basis of equality, mutual respect and a balance of interests," they know the real score. The new law signed by Trump is tantamount to a "full-scale trade war," conceded Russian Prime Minister Dmitry Medvedev. "The hope that our relations with the new American administration would improve is finished." Finished.

Trump Regime Hostile to US Workers

How it happened: From law professor to high court in 4 years