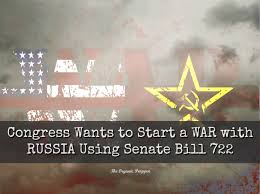 Would the new bill that the Senate has quietly passed actually remove executive powers from the President and start a war with Russia?

Our US Congress is filled with criminals, liars, people with serious health problems that could impair their judgment, and lifers with all the signs of advancing dementia, and yet these people are making decisions that could mean the difference between life and death for the rest of us while completely circumventing the checks and balances put in place by the Constitution.

A bill called "Countering Iran's Destabilizing Activities Act of 2017" is, unsurprisingly, inaccurately named. (Aren't all of the most powerful bills? I mean, the Patriot Act was anything but patriotic.)

Really, it's all about Russia and disabling the Executive Branch.

80% of the bill has absolutely nothing to do with Iran, but instead, focuses on Russia. It removes many executive powers from the President and gives them to Congress. In effect, it ties Trump's hands with regard to foreign policy by forcing him to abide by Executive Orders signed by Obama. If enacted, this would completely destroy our relationship with Russia.

The bill would enforce sanctions on Russia from executive orders that were signed by President Obama in 2017.

It is the sense of Congress that the Secretary of the Treasury and the Secretary of State should continue to implement Executive Order 13382 (50 U.S.C. 1701 note; relating to blocking property of weapons of mass destruction delivery system proliferators and their supporters). (source)