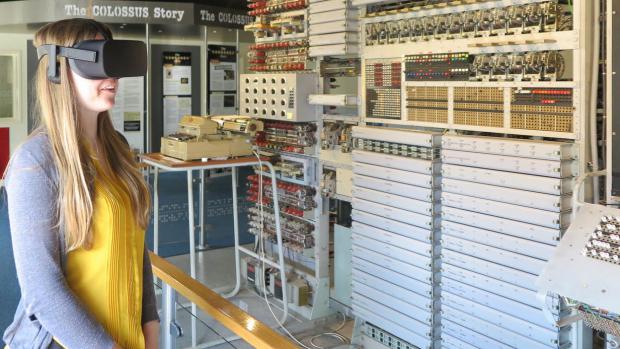 Visitors can virtually stroll around two of the museum's galleries and immerse themselves in the story of Colossus and how Bletchley Park code breakers cracked a complex cipher used by the German High Command in WWII. The VR experience is due to be released as an app later in the year, allowing anyone with a supported headset to tour the exhibits without leaving home.

Colossus certainly lives up to its name. The world's first semi-programmable electronic computer contained around 2,400 valves and was able to read up to 25,000 characters per second. It was designed to break a teleprinter (teletypewriter) encryption system dubbed Tunny by the folks working at Bletchley, and manufactured by the Lorenz company. The enormous machine's first day of work was February 5, 1944. By the end of WWII, some 63 million characters of German communications had been decrypted by the combined efforts of 550 codebreakers and 10 Colossus computers.

In 1992, work began on a rebuild of a working Colossus machine. The project was completed in 2007 and the Colossus workshop room was subsequently transformed into a viewing gallery at the museum. And now this gallery, along with the Tunny gallery, have been captured by six GoPro Hero 4 video cameras operated by Entropy Reality. The data then had to be processed, a truly colossal task in itself.

Sixty percent of Americans won't be able to cover basic necessities in a month or less...

Your Mattress Is Not the Key To a Good Night's Sleep

China to reclassify dogs as pets, not livestock, in wake of coronavirus

Fed Is Seizing Control of the Entire U.S. Bond Market

EASTER FOOL Pastor who said his congregation would 'rather die than miss church' ...

The "Coronavirus" Worm Has Turned: It Is now Time to Face the Truth

The New and Improved Propaganda

Small Business Guarantees Are a Bucket of Moral Fraud