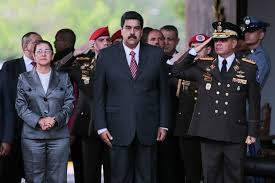 Today's sanction is a follow up to last week's announcement by the Trump administration in which the Treasuey revealed sanctions on 13 senior Venezuelan officials in an attempt to deter Maduro from moving forward with plan to rewrite Venezuela's constitution in what opponents regard as a potential power grab move. Needless to say, that particular attempt failed.

From the Treasury Department: