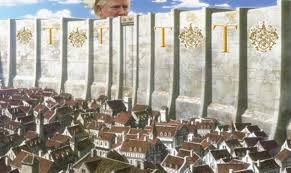 The House has passed a $788 billion spending bill that combines a $1.6 billion down payment for President Donald Trump's controversial border wall with Mexico with a whopping budget increase for the Pentagon.

The 235-192 vote both eases a large backlog of unfinished spending bills and gives Trump and his House GOP allies political wins heading into the August recess. Challenging hurdles remain because the measure will meet with more powerful Democratic opposition in the Senate.

The 326-page measure would make good on longtime GOP promises to reverse an erosion in military readiness. It would give veterans programs a 5 percent increase and fund a 2.4 percent military pay raise.

GOP leaders used the popularity of the Pentagon and veterans programs to power through money for Trump's border wall.

Still, a potential government shutdown battle over the U.S.-Mexico wall looms with Senate Democrats this fall. The generous defense spending increases also run afoul of strict spending limits set by an earlier budget law, and there's been no progress on a bipartisan budget deal that would be a prerequisite for the higher spending to take full effect.

The House added Trump's wall funding by a 230-196 procedural vote that denied angry Democrats an up-or-down vote. The wall gets low marks in public opinion polls and is opposed by many of the GOP's more moderate lawmakers.

Trump promised at nearly every rally and campaign event that Mexico would pay for the wall. Mexico said no, and U.S. taxpayers will have to provide the money.

"The president has promised this funding, the American people want this funding, and today the House is making good on that promise," said Rep. Steven Palazzo, R-Miss.