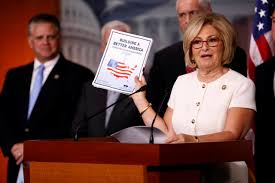 On Tuesday morning, House Republicans released a fiscal 2018 budget plan that will pose the next major political test for President Donald Trump's legislative agenda by combining tax reform with controversial spending cuts. While unlikely, the spending plan, which covers the fiscal year beginning Oct. 1, aims to move the government from a $472 billion deficit in 2018 to a $9 billion budget surplus in 2027 (the full forecast can be found here).

As Reuters reports, the change is mostly due to the House Budget Committee forecast of U.S. economic growth of 2.6% annually that assumes future changes in tax, healthcare and financial laws, as well as deregulation. Meanwhile, the nonpartisan Congressional Budget Office has forecast economic growth of 1.9 percent from 2017 to 2027, and does not anticipate a budget surplus over the next decade.

The proposed 10 year, $4 trillion budget ignores Trump's request for $54 billion in cuts to departments and agencies such as State and the National Institutes of Health. Instead, spending outside of defense would be reduced by $5 billion. Meanwhile, the GOP proposal would boost funding for the nation's defense by $72 billion, $18 billion more than Trump sought. The $4 trillion blueprint also allows an overhaul of the U.S. tax code to pass Congress without support from Democrats, along with a partial repeal of the 2010 Dodd-Frank Wall Street reform law and $203 billion in savings from mandatory federal programs including food stamps over the next decade.

Here are the highlights, courtesy of Citi (the GOP's own 1-page summary can be found here):

Estimates assume GDP of 2.6% annually for the 10y period through 2027, including future changes in tax, healthcare, financial laws and deregulation. This compares to the Congressional Budget Office's GDP assumption of 1.9%.

The Washington Post explains that it looks to turn Medicare into a voucher-like program in which future retirees would receive a fixed benefit to purchase health insurance on the open market. The plan looks to cut near USD500bn from the Medicate program.

It also looks for a 1.5tn cut from Medicaid and Obamacare.

Includes USD621.5bn in defense spending and 511bn on non-defense discretionary spending in 2018.

CNN notes that "as they did with their Obamacare repeal plan in the 2017 budget, GOP leaders are employing a budget tool called 'reconciliation' to move tax legislation through the Senate with a simple majority."

Below is the infrgraophic supplied by the House GOP: