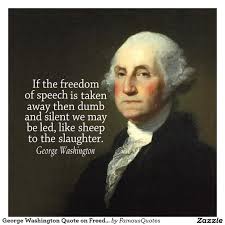 "Since when have we Americans been expected to bow submissively to authority and speak with awe and reverence to those who represent us? The constitutional theory is that we the people are the sovereigns, the state and federal officials only our agents. We who have the final word can speak softly or angrily. We can seek to challenge and annoy, as we need not stay docile and quiet."—Justice William O. Douglas, dissenting, Colten v. Kentucky, 407 U.S. 104 (1972)

Forget everything you've ever been taught about free speech in America.

There can be no free speech for the citizenry when the government speaks in a language of force.

What is this language of force?

This is not the language of freedom.

This is not even the language of law and order.

This is the language of force.

Unfortunately, this is how the government at all levels—federal, state and local—now responds to those who choose to exercise their First Amendment right to peacefully assemble in public and challenge the status quo.

This police overkill isn't just happening in troubled hot spots such as Ferguson, Mo., and Baltimore, Md., where police brutality gave rise to civil unrest, which was met with a militarized show of force that caused the whole stew of discontent to bubble over into violence.

A decade earlier, the NYPD engaged in mass arrests of peaceful protesters, bystanders, legal observers and journalists who had gathered for the 2004 Republican National Convention. The protesters were subjected to blanket fingerprinting and detained for more than 24 hours at a "filthy, toxic pier that had been a bus depot." That particular exercise in police intimidation tactics cost New York City taxpayers nearly $18 million for what would become the largest protest settlement in history.

Demonstrators, journalists and legal observers who had gathered in ?North Dakota to peacefully protest the Dakota Access Pipeline reported being pepper sprayed, beaten with batons, and strip searched by police.

More recently, this militarized exercise in intimidation reared its ugly head in the college town of Charlottesville, Va., where protesters who took to the streets to peacefully express their disapproval of a planned KKK rally were held at bay by implacable lines of gun-wielding riot police. Only after a motley crew of Klansmen had been safely escorted to and from the rally by black-garbed police did the assembled army of city, county and state police declare the public gathering unlawful and proceed to unleash canisters of tear gas on the few remaining protesters to force them to disperse.

To be clear, this is the treatment being meted out to protesters across the political spectrum.

The police state does not discriminate.

As a USA Today article notes, "Federally arming police with weapons of war silences protesters across all justice movements… People demanding justice, demanding accountability or demanding basic human rights without resorting to violence, should not be greeted with machine guns and tanks. Peaceful protest is democracy in action. It is a forum for those who feel disempowered or disenfranchised. Protesters should not have to face intimidation by weapons of war."

A militarized police response to protesters poses a danger to all those involved, protesters and police alike. In fact, militarization makes police more likely to turn to violence to solve problems.

As a recent study by researchers at Stanford University makes clear, "When law enforcement receives more military materials — weapons, vehicles and tools — it becomes … more likely to jump into high-risk situations. Militarization makes every problem — even a car of teenagers driving away from a party — look like a nail that should be hit with an AR-15 hammer."

Even the color of a police officer's uniform adds to the tension. As the Department of Justice reports, "Some research has suggested that the uniform color can influence the wearer—with black producing aggressive tendencies, tendencies that may produce unnecessary conflict between police and the very people they serve."

You want to turn a peaceful protest into a riot?

Bring in the militarized police with their guns and black uniforms and warzone tactics and "comply or die" mindset. Ratchet up the tension across the board. Take what should be a healthy exercise in constitutional principles (free speech, assembly and protest) and turn it into a lesson in authoritarianism.

Mind you, those who respond with violence are playing into the government's hands perfectly.

The government wants a reason to crack down and lock down and bring in its biggest guns.

They want us powerless in the face of their artillery and armed forces.

They want us silent, servile and compliant.