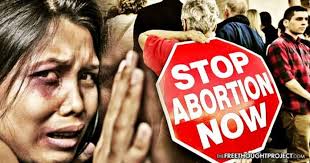 A draconian new law passed in Arkansas forces women to obtain permission from the man who impregnated them before they can have an abortion.

Arkansas — Arkansas legislators recently passed an abortion bill that is set to come into force at the end of the month. It will require women to obtain permission from men before they can have an abortion. The law, rightfully so, has the ACLU and civil rights activists up in arms as it also applies in instances of abuse and even rape.

The bill, H.B. 1566, was passed in March and is a provision under the Arkansas Final Disposition Rights Act of 2009. Under this act, in the matter of someone's death, family members have to come to an agreement on how to handle the bodies of their dead relatives.

While it may sound reasonable on the surface, the bill also applies to abusive partners and rapists who impregnated their victim.

Planned Parenthood, which kills more black people than any other group...

The CRIMINALIZATION of journalism that exposed Planned Parenthood's...

Anti-Abortion Drama 'Unplanned' Is a Runaway Hit with the People, Globohomo Tries Hard to Si

America's baby mayor, a face of the anti-abortion movement