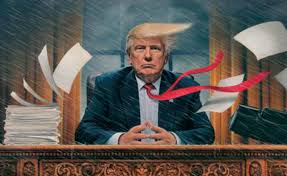 Ever since Donald Trump was inaugurated President, Democrats have agitated and schemed for his removal, via either impeachment or the 25th Amendment to the U.S. Constitution.

Section 4 of the 25th Amendment states:

On Feb. 18, 2017, writing in the New York Times less than a month after Trump's inauguration, Nicholas Kristof ruled out impeachment because "it's hard to imagine a majority of the House voting to impeach, and even less conceivable that two-thirds of the Senate would vote to convict so that Trump would be removed. Moreover, impeachment and trial in the Senate would drag on for months, paralyzing America and leaving Trump in office with his finger on the nuclear trigger."

So Kristof turned to the 25th Amendment as a more likely method:

"But the cleanest and quickest way to remove a president involves Section 4 of the 25th Amendment and has never been attempted. It provides that the cabinet can, by a simple majority vote, strip the president of his powers and immediately hand power to the vice president. The catch is that the ousted president can object, and in that case Congress must approve the ouster by a two-thirds vote in each chamber, or the president regains office.

The 25th Amendment route is to be used when a president is 'unable' to carry out his duties. I asked Laurence Tribe, the Harvard professor of constitutional law, whether that could mean not just physical incapacity, but also mental instability. Or, say, the taint of having secretly colluded with Russia to steal an election?

Tribe said that he believed Section 4 could be used in such a situation."