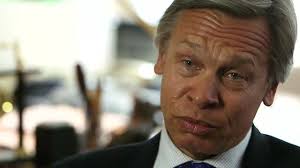 Russian Senator Alexei Pushkov warns that the United States is preparing a false flag "provocation" as a pretext to launch a military assault on Syria.

Responding to a CNN report that the U.S. "has ships and aircraft in place to strike Syria," if ordered to do so by the President, Pushkov cautioned that this could be the precursor to a staged incident.

"The United States put its Navy and Air Force on alert, and is just waiting for an excuse to strike Syria. Assad will not give them one." This, Pushkov wrote, makes it "the perfect time for a provocation."

Earlier this week, the administration warned Bashar Al-Assad that the U.S. was aware of new preparations for a chemical attack and that he would pay a "heavy price" for any such action.

This was followed up by a tweet from Ambassador Nikki Haley in which she asserted, "Any further attacks done to the people of Syria will be blamed on Assad, but also on Russia & Iran who support him killing his own people."

On Wednesday, White House spokeswoman Sarah Huckabee Sanders indicated that the Trump administration's warning to Assad had been "successful," but Russian Foreign Ministry spokeswoman Maria Zakharova took the move as "a warning sign of an intervention."