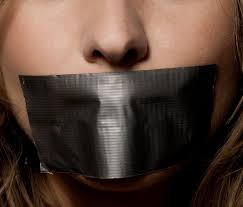 Freedom of speech is up there with guns for rights that Americans hold sacred. The political elite has to get creative when they try to take these rights away, lest the backlash makes them lose ground rather than gain it.

By and large, that has been the case with guns; everytime talk starts about restrictive gun control, gun sales soar. Most people realize banning guns would not be feasible, and even if it was, it would not reduce crime but rather leave people vulnerable. And it is encouraging to see many also realize that the prime reason for gun ownership is to prevent genocide, especially perpetrated by the government.

Then there is a cultural meme that seems so obvious I hardly mention it, yet it deserves the spotlight every now and then.

Free speech is being conflated with hate speech in true 1984 doublespeak. There was a time when it was obvious to anyone with a brain that the limits of free speech do not stop when speech becomes offensive. It was once so cherished that people like Voltaire and Evelyn Beatrice Hall expressed that even when they disagree with what someone says, it would still be worth it to defend to the death their right to say it.

That is a pretty profound commitment to free speech which supports principles over politics. But today rival political factions delight in their opponents being punished for their use of free speech. Oh, but of course it isn't "free speech" they want to be banned, it is "hate speech."

The left has always been particularly good at changing the meaning of words over time, a prime example being the word liberal which should mean freedom but now means everything I don't like should be banned.

The Mayor of Portland Oregon is one of these extremists who tried to revoke permits for a free speech rally. Apparently, he missed the irony; Mayor Ted Wheeler said he was only trying to ban "hate speech" that incites violence. He tried to connect a stabbing on a train in Portland with pro-Trump "hate speech."

The stabbings that killed two men who tried to intervene to stop a man harassing a woman wearing a hijab do seem to be inspired by anti-Muslim sentiments. But the crime was murder, not "hate speech." Too many illegal things are pre-crimes or victimless crimes; they are illegal because people worry that they will lead to an actual crime with a victim.