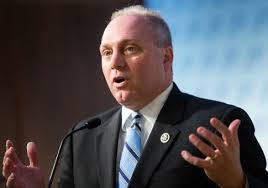 A total of 30 Republican members of Congress have either been attacked or revealed that they were the victim of a death threat since the beginning of May.

May 8: Wendi Wright, 35, was arrested after stalking Rep. David Kustoff (Tenn.) and trying to run him off the road. After pulling over, Wright "began to scream and strike the windows on Kustoff's car and even reached inside the vehicle."

May 9: Virginia Rep. Tom Garrett needed heavy security at a town hall after receiving a series of death threats in May that police "deemed to be credible and real."

"This is how we're going to kill your wife," one message said. Others detailed how they would kill his children, and even his dog.

May 12: A town hall participant accosted North Dakota Rep. Kevin Cramer, shoving fake dollar bills into his suit jacket. A Kramer supporter grabbed the same man by the neck. Both men were ejected by law enforcement, but neither were charged.

May 12: A Tucson, Ariz. school district employee was arrested by the FBI for sending several death threats to Arizona Rep. Martha McSally. The man threatened to shoot McSally and told her to "be careful" because her days "were numbered."

May 21: Florida Rep. Ted Yoho described his office getting vandalized by protesters. One female constituent left a voicemail on an office answering machine, promising, "Next time I see you, I'm going to beat your f**king ass."

Scalise, the House majority whip, was shot in the hip, and remains in the hospital. Four others were injured, including a staffer for Williams and two Capitol Police officers assigned to Scalise.

The same day, New York Rep. Claudia Tenney received an email reading, "One down, 216 to go."

June 17: Missouri Rep. Ann Wagner revealed that she had gotten five death threats in the weeks leading up to the Scalise shooting. Wagner said that protesters had been "vandalizing my home, showing up with masks and gravestones, and laying down on my driveway and drawing chalk outlines of dead bodies. Picketing my church at 8 and 10 o'clock Mass."

June 22: An Ohio man was arrested for leaving a voicemail threatening the life and family of Rep. Steve Stivers (Ohio).