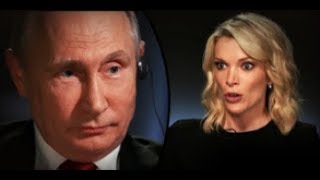 NBC's Megyn Kelly wielded one of Official Washington's most beloved groupthinks to smack Russian President Vladimir Putin over his denials that he and his government were responsible for hacking Democratic emails and interfering with the U.S. presidential election.

In her June 2 interview with Putin, Kelly noted that all "17 intelligence agencies" of the US government concurred in their conclusion of Russian guilt and how could Putin suggest that they all are "lying." It's an argument that has been used to silence skeptics for months and apparently is so useful that no one seems to care that it isn't true.

For instance, on May 8, in testimony before a Senate Judiciary subcommittee, former Director of National Intelligence James Clapper conceded publicly that the number of intelligence agencies involved in the assessment was three, not 17, and that the analysts assigned to the project from CIA, FBI and NSA had been "handpicked."

On May 23, in testimony before the House Intelligence Committee, former CIA Director John Brennan confirmed Clapper's account about the three agencies involved. "It wasn't a full interagency community assessment that was coordinated among the 17 agencies," Brennan acknowledged.

Tucker: Experts finally admit they were wrong from the beginning