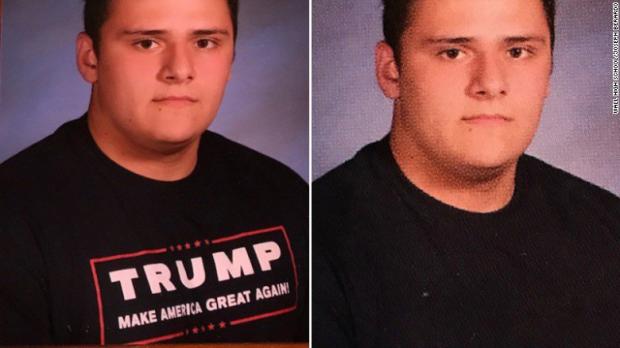 A 17-year-old high school student in New Jersey had his "Make America Great Again" t-shirt edited out of his 2017 yearbook photo.

According to the Washington Post, Grant Berardo, who wore the iconic shirt during picture day last October, noticed the change after receiving his yearbook last week.

The edit baffled both Grant and his parents as the shirt did not violate Wall Township High School's dress code, which only states clothing may not "reference drugs or alcohol or weapons."

"He was disappointed. This was the first election he has been interested in," Joseph Berardo, the student's father, said.

Incredibly, Grant was not the only pro-Trump student who was targeted with such edits.

Another student, junior Wyatt Dobrovich-Fago, had a Trump logo similarly removed from his vest while his sister, Montana, had a quote from Trump erased from the bottom of her photo.