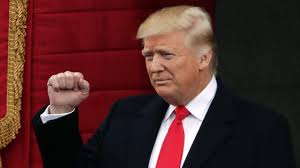 Wild and unsupported accusations of treasonous or illegal Russian connections have been the mainstay of the news since Trump's campaign for president. These accusations have reached the point that there is an impeachment movement driven by the national security state and its liberal media and endorsed by Democrats, the American leftwing which has turned against the working class as "Trump deplorables," and luminaries such as Harvard Law Professor Larry Tribe. The Washington Post, which was not present at the meeting of President Trump with Russian Foreign Minister Lavrov, purports to know that Trump gave Lavrov US national security information.

The Russian government has offered the presstitute media a transcript of the meeting, but, of course, the pressitutes are not interested.

The latest story is that Trump tried to bribe FBI Director Comey, before he fired him, not to investigate Trump as part of the "Russian investigation." Clearly there is no intelligence left in the American media. The President doesn't need to bribe someone he can fire.

What we are witnessing is the determination of the national security state to keep their prized "Russian Threat" in its assigned role as the Number One Threat to the US. The liberal media, owned by the CIA since the 1950s is in accord with this goal.