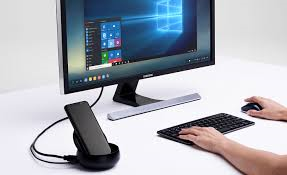 It's far ahead of Microsoft's Continuum, but not without its own faults

Perhaps you've heard this idea before: can a single device work as both your mobile phone and your desktop or laptop computer? If you have, and you've used the many prior attempts at it, you've probably been disappointed. A lot of companies, from Palm to Motorola and even Microsoft, have tried this idea, yet none have succeeded; we're still all carrying around phones and laptops instead of just one, do-everything device.

That's the world Samsung is entering with DeX, a $149.99 docking station for the Galaxy S8 smartphone. On paper, it's just like Microsoft's Windows 10 Continuum: a basic dock that you plug the phone into that provides connections for a monitor, power, Ethernet, and USB devices. Hook up a monitor to the DeX's HDMI port and pair a wireless mouse and keyboard to the phone, and boom, you instantly have a desktop workstation.

HOW TO GARDEN IN A TINY SPACE - GREENSTALK VERTICAL PLANTER

United Airlines preparing to furlough 36,000 workers due to coronavirus collapse