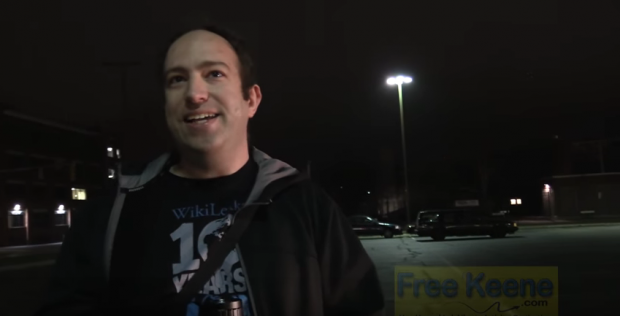 On April 20th, Manchester police conducted another DUI checkpoint, believed to be the first of 2017. As always, Cop Blockers and more than a dozen other liberty activists came out with signs redirecting peaceful motorists away from turning down Bridge St, where they would have hit the checkpoint.

Longtime Manchester Cop Blocker Riaz Kahan stated that the interdiction was a major success, with 90% of cars that were intending to turn towards the checkpoint being redirected to another route, avoiding unnecessary police harassment. Manchester police conduct at least a few of these checkpoints per year and activists from all over the state are attracted to help. It's another unprecedented level of activism that happens easily and regularly in New Hampshire, since there are active migrations of libertarians moving here. (Check out 101 reasons why, here.)

However, for the first time in the history of Manchester's checkpoints, an activist was arrested. Not for DUI, but for crossing the street, walking toward the checkpoint.

Keene-based activist and privacy-centric computer hardware entrepreneur Christopher Waid was the victim of the police's most recent attack on freedom of the press. We were merely trying to cross the street so as to better observe the police's unconstitutional checkpoint activity. However as we began to approach the median multiple police shouted at us including officer #1, Robert Harrington, who you may remember as the cop who popped Derrick J Freeman's car door open without permission several years back. Here's the video of Chris' arrest and post-bail interview: https://youtu.be/o3J8T2fOCcU

Chris is a weekly co-host on syndicated radio show Free Talk Live, where we discussed the arrest on last Friday's show. He's a rare breed - a business owner who is willing to put his very freedom on the line. If more business owners had this level of courage, they could just ignore the government rather than obey them, and the government would have to go away.

In addition to standing up for freedom of the press, Chris is an active police accountability activist, with many hours logged in the streets, recording cops. It is his right to stand where he wants, so long as he's not actively interfering in police investigations. By standing in the median, he's taking his risk and the police have no obligation to protect him, especially from himself. If they try to use the argument that them yelling at him was for his own safety, that hopefully won't hold up in court. We've been in medians frequently for activism in Keene and police here have been mostly respectful towards us. By the way, Chris is a homeowner in Keene, to which he moved his linux hardware business, Think Penguin in early 2016.

Feel free to get in touch with me if you have questions or would like to interview an activist,
Ian Freeman
Blogger, FreeKeene.com
603-513-2449