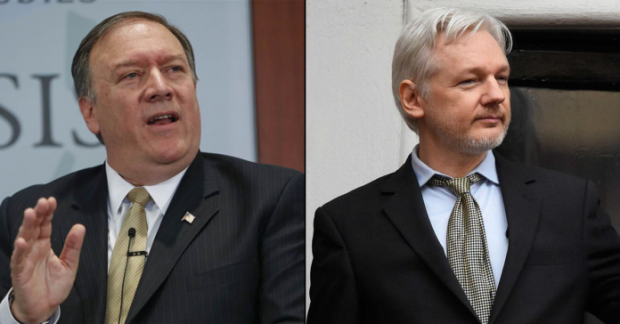 You would think that by the time a person becomes the Director of the CIA, he would have a correct understanding of the Constitution, which is the founding document of the federal government, which the CIA is part of. This should be especially true when the CIA Director is a former member of Congress, a graduate of West Point, and the holder of a law degree from Harvard.

Embarrassingly, such is not the case with CIA Director and former U.S. Congressman Mike Pompeo. In a speech delivered at the Center for Strategic and International Studies in Washington, D.C., Pompeo demonstrated a woeful lack of understanding of the Constitution and the Bill of Rights, specifically the First Amendment.

Referring to his belief that WikiLeaks official Julian Assange, who is a citizen of Australia, should be indicted and prosecuted by the U.S. government for revealing secrets of the U.S. national-security establishment, Pompeo stated:

Julian Assange has no First Amendment freedoms. He's sitting in an Embassy in London. He's not a US citizen.

That is quite an amazing statement. It's also a misleading and fallacious one.

Thomas Jefferson makes this point clear in the Declaration of Independence when he points out that people are endowed with unalienable rights by nature and God, not by government or by some document that calls government into existence.

There is something else that is important to note here: As Jefferson points out, everyone, not just American citizens, is endowed with these natural, God-given rights, including life, freedom, and the pursuit of happiness. That includes people who are citizens of other countries. Citizenship has nothing to do rights that are vested in everyone by nature and God.

At the risk of belaboring the obvious, that includes Julian Assange. His freedom does not come from the Constitution or the First Amendment or by the Australian government. His freedom comes from the same source that your freedom and my freedom come from — from nature and from God.

So, what is the purpose of government? Jefferson makes it clear: Government's job is to protect the exercise of natural or God-given rights, including liberty.

What about the First Amendment? If its purpose is not to give people rights, including freedom, what is its purpose?