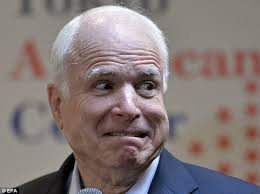 This is causing the President to make faulty decisions which are pushing the world to the brink of World War III. Mr. Steele, provides some much needed clarity as he sheds light on this volatile topic.

I have previously interviewed ex-CIA operative, Robert David Steele. Mr. Steele is a distinguished operative who has created many very important practices and programs for the CIA.

Last night he sent myself and select others a press release with some very stunning revelations regarding the chemical weapons false flag attack in Syria in which Syrian leader, Assad, was falsely blamed.

In the following paragraphs, I will be listing excerpts of Mr. Steele's release along with confirming facts in support of his statement.

"We do now know (I did not know this at the time the below video was recorded and I have no link for this, it comes to me from an inside source) that former CIA Director John Brennan plotted this false flag attack, which may have involved some real sarin allegedly destroyed during the Obama Administration, with Senator John McCain and National Security Advisor Herbert McMaster…"