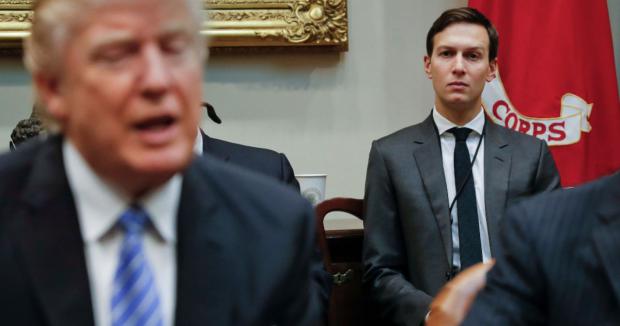 The combination of the two have brought the US to the brink of World War III against Russia, China and North Korea. Trump's daughter may not need a divorce, but Trump certainly does and it did not involve kicking Bannon to the curb. The wrong dog got kicked. Traitor Kushner needs to go. Already because of Kushner's influence we have seen Trump lose the support of people like Paul Joseph Watson and Michael Savage among other notables. Kushner is pure poison and he is the straw that will stir the drink called World War III.

Previously, I reported that former House of Representatives member and a frequent candidate for President stated that Trump's attack on Assad's forces in Syria was a "A victory of neo-conservatives"

Ron Paul went on to say that that he does not expect the peace talks that resulted in Assad staying in power will be honored or revisted any time in future.

Kushner is Pure Poison for the American People

The United States has a vested interst in protecting Israel, both from a geopolitical standpoint and a moral perspective. However, that does not mean that we bend to every Israeli desire and allow their operatives, such as Kushner to force the White House to pursue reckless policies which are not in the national security interests of the United States and in the interest and safety of the American people.

All things considered, Israel is an ally, but they are not our masters and Kushner is a foreign operative who is working against the interests of the United States and he is obviously having undue influence on President Trump. And for whatever reason, Trump has allowed himself to be manipulated into a war posture when it was not necessary.

So long as Kushner remains in the White House, I think outspoken opponents to the attacks in Syria, such as Ron Paul, are in extreme danger. Why do I believe this? Because I have had two trusted, highly credible sources tell me that Kushner works for the Mossad and that Israel desperately wants war with Syria in order to eliminate the Syrian/Russian threat. With Syria out of the way, the Iranian crisis, from an Israeli perspective becomes more manageable and this also reduces the threat of Israel being caught in a two-front war. Part of me empathizes with this viewpoint as Israel lives under constant threat of annihilation. However, a war with Syria brings Russia into th equation and things could spin out of control very, very quickly. Therefore, both my sources and myself believe that a war in Syria is not in our country's best interest. And if we go to war, we are following the dictates of the globalists and their neocon minnions.

Ron Paul told RT that there is no proof of Damascus' guilt that could trigger such a rash and violent response from the US.

"I don't think the evidence is there, at least it hasn't been presented, and they need a so-called excuse, they worked real hard, our government and their coalition."

Ron Paul is correct, the evidence is not there. Assad would have no interest in doing what he what he is accused of because he had reached an agreement that would have left him in power. I said the same thing within 20 minutes of learning of the attack and I broadcasted both Ron Paul's and my views on the subject.