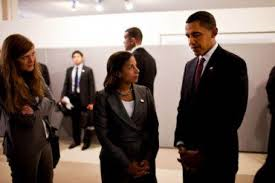 The White House Counsel's office identified Rice as the person responsible for the unmasking after examining Rice's document log requests. The reports Rice requested to see are kept under tightly-controlled conditions. Each person must log her name before being granted access to them.

"Unmasking" is the process of identifying individuals whose communications were caught in the dragnet of intelligence gathering. While conducting investigations into terrorism and other related crimes, intelligence analysts incidentally capture conversations about parties not subject to the search warrant. The identities of individuals who are not under investigation are kept confidential, for legal and moral reasons.

Under President Obama, the unmasking rules were changed. Circa originally reported:

As his presidency drew to a close, Barack Obama's top aides routinely reviewed intelligence reports gleaned from the National Security Agency's incidental intercepts of Americans abroad, taking advantage of rules their boss relaxed starting in 2011 to help the government better fight terrorism, espionage by foreign enemies and hacking threats, Circa has learned.

Three people close to President Obama, including his "fall guy" for Benghazi (Susan Rice), had authorization to unmask.