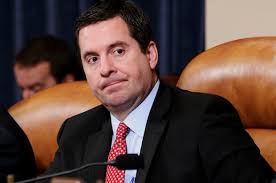 The White House "is not an internet café. You can't just walk in and receive classified information," Swalwell said on MSNBC's "Morning Joe" show.

Nunes said Monday that he had been on White House grounds when he met with an unnamed source who provided him with documents that he claims show evidence that Trump and his associates may have had their communications "incidentally collected" by the intelligence community during the transition period.

The next day, he briefed the president on the information he had received before briefing members of his committee.

"I've been around for quite a while and I've never heard of any such thing," Republican Sen. John McCain said Tuesday morning of Nunes on CBS.

Nunes' announcement ignited a firestorm, as Democrats on the committee wondered why he had viewed the documents at the White House instead of the Capitol, as well as why he went to the president before briefing the rest of the committee. Several Democrats on and outside of the committee — including ranking member Adam Schiff — called on Nunes to recuse himself from the committee's investigation into Trump's connections with Russia.

"Because of classification rules, the source could not simply put the documents in a backpack and walk them over to the House Intelligence Committee space," Nunes' spokesman, Jack Langer, said on Monday. "The White House grounds was the best location to safeguard the proper chain of custody and classification of these documents so the chairman could view them in a legal way."

Swalwell disputed Nunes' statement, saying that there were secure facilities at the Capitol where Nunes could have viewed the intel he had received about the president and his associates.