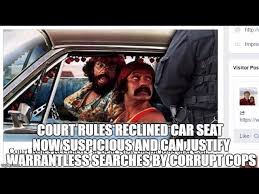 Topeka, KS — In one of the most stereotypical, rights-violating and tyrannical laws we've ever seen, the Kansas Supreme Court just ruled that a reclined car seat is suspicious behavior and can be used by police as a justification for warrantless searches. As if the police needed another reason to stop and harass you, they can now do so — based entirely on your seat posture while riding in a vehicle.

Prior to heading to the Supreme Court, the Court of Appeals first concluded that a reclined seat "does not significantly add to the probable-cause analysis" because reclining in a seat is "a common, innocuous activity." Howard, 51 Kan. App. 2d at 38. However, if the officer sees a plastic bag in a car with a reclined seat — they now have probable cause. Howard, 51 Kan. App. 2d at 41.

The case of the State of Kansas v. Cameron Howard began when Howard allegedly attempted to avoid a traffic light by driving through a parking lot. Claiming this gave him probable cause to detain and otherwise extort Howard, a police officer pulled him over. That's when the officer noticed the 'suspicious' passenger seat that was in a slightly reclined position.

Ignoring the fact that the passenger seat was occupied by Howard's pregnant companion, the officer ordered Howard out of the vehicle. He then noticed an empty plastic bag and claimed this gave him probable cause to search the vehicle. During the warrantless search of the vehicle, the officer found a handgun under the floor mat.

According to the Kansas Supreme Court, "the officer's training and experience that led him to know people regularly package drugs utilizing twisted off corners of clear plastic baggies."

In Reality, What is Common Law?

Dems PANIC As OVER 100 Lawmakers Plan To CONTEST The Election On January 6th!

The Lawsuit That Could End Covid-1984 with Pam Popper