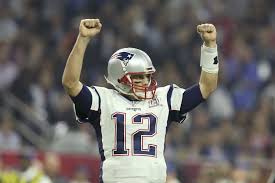 Tom Brady's missing Super Bowl jersey has been found in Mexico six weeks after it vanished from the Patriots' locker room — but the mystery isn't over.

The NFL said the jersey was found in "possession of a credentialed member of the international media," and authorities were investigating Monday whether a former Mexican tabloid newspaper executive played a role in the theft.

It wasn't the only piece of memorabilia recovered: Authorities found a Brady jersey that had gone missing after the Patriots' 2015 Super Bowl win over the Seattle Seahawks. A helmet belonging to a Denver Broncos player was also discovered, NFL spokesman Brian McCarthy said.

The stolen jersey — and the investigation that stretched from Boston to the border — captivated Patriots fans and social media for several days after the Patriots' 34-28 overtime win over the Atlanta Falcons.

"If it shows up on eBay or something, somebody let me know," Brady said after the game.

Houston police investigators relied on a tip from an informant to trace the jersey, estimated to be worth about $500,000, to Mexico.

U.S. and Mexican officials have not identified the suspect, but the name of a former newspaper director circulated widely in Mexican news media and on social networks.

A Mexican federal government official, speaking on condition of anonymity because of the sensitivity of the case, said the attorney general's office participated in the investigation and obtained a search warrant. The jersey and other objects were found March 12, the official said.

The paper said that if the accusations are true, it "strongly condemns" that the employee used his position "to obtain a media accreditation to be able to access the field of play, news conferences and probably other areas of NRG Stadium." The paper said it had not been contacted by investigators.

A company official who was not authorized to discuss the matter publicly told The Associated Press on condition of anonymity that the former director was not part of the media outlet's Super Bowl coverage.

"He got accredited on behalf of La Prensa, but he took vacations. … He was not sent by us," the person said. "They were not even aware that (he) had gone to the Super Bowl."

The former director handed over his company phone when he resigned last Tuesday, the person said.

No arrests had been made. The AP is not identifying the director because he has not been charged.

Brady, in a statement from his agent, Don Yee, expressed gratitude to investigators but said he hadn't yet been reunited with the jerseys.

"I am happy my jerseys from SB 49 and SB 51 have been recovered, and I want to thank all of the law enforcement agencies involved," Brady said. "I know they worked hard on this case — and it is very much appreciated. Hopefully when I get the jerseys back I can make something very positive come from this experience."

NFL Ratings Getting Worse Despite Effort To Lure Kids Via Nickelodeon

First of Many Cancellations: PGA Strips Trump of the 2022 PGA

NFL player to be paid in bitcoin

The War on 'Manly Men'