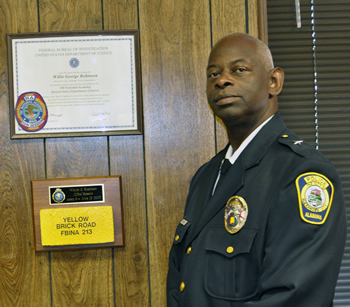 Alexander, AL — The Southern Poverty Law Center has reached a $680,000 settlement in its lawsuit against the Alabama city of Alexander and its police chief Willie Robinson. The settlement was for depriving 190 of its residents their rights to due process (6th Amendment) and the unlawful seizure of their property (4th Amendment). Sheriff Robinson has even been asked to resign by lawyers representing their client.

Each one of the 190 individuals will receive $500 cash from the city for jailing them for being too poor to pay the fines imposed on them by the town. As reported by AL.com, "Hundreds of impoverished residents have faced unconstitutional and unjust treatment in Alexander City simply because they were too poor to pay fines and fees," said Sam Brooke, in a press release. Brooke is the SPLC's deputy legal director. He added, "The shuttering of this modern-day debtors' prison, along with the monetary award, brings justice to many of the people who were unfairly targeted for being poor."

The way the injustice flourished was as follows. A resident would receive a speeding ticket, for example. If they were unable to pay, they were arrested, taken to jail, and forced to remain there. While in jail, they would earn $20 a day for just being in jail, and $40 a day for doing laundry, cleaning, or washing police cruisers, until the total sum of the fine was paid in full. Each person was not allowed to go before a judge, nor to have a lawyer present to help in aid in their defense.

"Around 30 percent of Alexander inhabitants live below the poverty line. Plaintiff Amanda Underwood is one such person, who was jailed twice for not being able to pay her fines. Underwood previously earned $8 an hour and has two young children, according to the SPLC release. After not being able to pay a fine of $205 for a traffic violation, Underwood had to borrow money to secure her release. On a separate occasion, Underwood was fined $250 for driving without a license. She spent five days in jail working off her debt."

What may have seemed like a quick way for the town to punish offenders — and settle long-standing fines, fees, and court costs — turned out to be a complete violation of Alexander's residents' civil rights. Underwood reveled in the victory saying, "I am glad the city is going to pay everyone who they jailed, to try to undo some of the harm they caused…I am so proud that this lawsuit has made a difference. I hope it will help many others, especially those like me who have been unfairly punished for being poor."