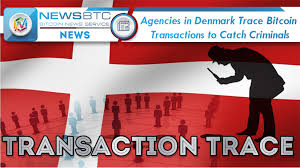 Bitcoin was never really anonymous, and it seems the Danish police have caught on to that fact. According to reports by Danish newspaper Berlingske, law enforcement in the Scandinavian country has figured out how to apply blockchain analysis to hunt down and prosecute darknet market vendors.

"The perspective is groundbreaking," Kim Aarenstrup, head of the National Cyber Crime Centre (NC3) of the Danish National Police, told Berlingske. "Where the investigation previously hit a dead end, we can now proceed."

Bitcoin has been presented as an anonymous digital currency for a long time. But this is not really accurate. While payments are not made to real-world identities, they are made to Bitcoin addresses that are publicly available on the blockchain. If such an address can be tied to a real-world identity, all anonymity is lost. That's why some refer to Bitcoin as "pseudonymous" rather than anonymous.

By applying blockchain analysis and combining this with Know Your Customer (KYC) and Anti-Money Laundering (AML) policies by bitcoin exchanges, Danish police are able to track down darknet market users.

"We are pretty much unique in the world at this point because no one else has managed to use these tracks as evidence," Aarenstrup told Berlingske. "Everyone is looking toward Denmark in this field, and we are in close dialogue with a number of other countries right now so we can further develop methods and teach them how we do it here."

More specifically, it seems the Danish police are using blockchain analysis to close a sort of legal loophole utilized by users of darknet markets like AlphaBay and Silk Road. Contraband — often illegal drugs — are typically shipped to the home addresses of darknet customers. But if the package is intercepted by the police, the buyer can simply deny having ordered anything.

Now, NC3 claims to have developed special software that applies blockchain analysis to prove that the delivery address matches a specific Bitcoin transaction. This has led to two convictions over the past few months.

Getting paid in Bitcoin and Cryptocurrencies : The Bitcoin.com Weekly Update

Gamblers Could Use Bitcoin at Slot Machines With New Patent

Where Did That $20 Billion In "Initial Coin Offering" Cash Wind Up?