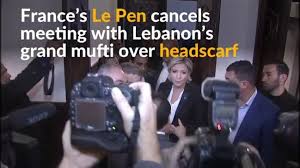 After informing Lebanon's top Sunni Muslim cleric ahead of time that she would not don a headscarf at their meeting Tuesday, Le Pen was still bombarded with a request to wear one.

But she held her ground, strongly refused and walked away from the scheduled appointment.

The debacle topped Le Pen's three-day visit to Lebanon, where she held her first campaign meeting with a head of state.

It highlighted the larger world-wide conservative movement of anti-globalism, much of which can be attributed to the election of U.S. President Donald Trump.

It drew the focus to Le Pen's strong support for secularism and a proposal in her presidential platform that promotes banishing headscarves and other obvious religious symbols in all public spaces.

"I consider the headscarf a symbol of a woman's submission," Le Pen told reporters at the end of her visit. "I will not put on the veil."

When she was confronted by some as disrespectful in her refusal, she recognized the hypocrisy by acknowledging that Former U.S. First Lady Michelle Obama did the same thing, and was cheered for her strength.

The FALL Of France! - Economy Faces IMMINENT Disaster! - Will People RISE UP?

Soldier's bedroom has not been touched since he died… in WORLD WAR I:

Escobar: Why Is France Hiding A Cheap And Tested Virus Cure?

France, Czechs, & Other US Allies Exit Iraq Over COVID-19 Fears

A Report From Paris on Its Lockdown