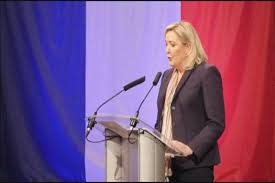 His analysis — which he said incorporates inputs such as social and traditional media discussions, polling, economics and demographics — predicts that Le Pen will "walk over" her opponents in the first electoral test and then prove most forecasters wrong and steal the lead in the second ballot, Kant said.

The French vote is split into two phases, with the top two candidates from the April 23 round due to face each other in a second run-off on May 7. In the running alongside 48-year old Le Pen are former economy minister and independent candidate Emmanuel Macron, conservative ex-prime minister Francois Fillon and socialist Benoit Hamon.

Kant's AI program predicts that Le Pen would take 28 percent of the vote in the first round, he said, which would best 16.4 percent for Fillon, and 19 to 20 percent for Macron.