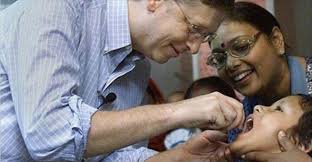 The move by India was prompted by fears that Big Pharma foreign donors associated with the Gates Foundation could influence policy making. By: Matt Agorist / The Free Thought Project   India — On February 28, 2017, the Bill and Melinda Gates Foundation's (BMGF) support of India's immunization program will cease to exist after the government has moved to sever ties with the billionaire's organization.

This move by the Indian state was largely prompted by fears that Big Pharma foreign donors associated with the BMGF could influence policy making. Having been the proving ground for outside foreign-funded health experts, this move is also part of a larger push to dismiss dozens of other schemes controlling and attempting to control decision making in key policy areas, according to Reuters.

For many years, the National Technical Advisory Group on Immunizations (NTAGI) has been serviced and funded by the Gates Foundation's  Immunization Technical Support Unit (ITSU) at the Public Health Foundation of India (PHFI).

Citing a 'conflict of interests', however, according to the India Times, the Gates Foundation's "ties" with pharmaceutical companies is part of the reason they shut the gate on BMGF.

As the India Times reports:

"There were questions about the Gates Foundation's ties with pharmaceutical companies and the possible influence this may have on the country's vaccination strategy. Global Policy Forum, an independent policy watchdog that seeks to promote accountability in international organisations, raised some of these concerns in a study in December 2015.

The study, called 'Philanthropic Power and Development -Who shapes the agenda?', had cautioned on "the growing influence of the large global philanthropic foundations, especially the Bill & Melinda Gates Foundation, on political discourse and agenda-setting in targeted fields, and fully analyze the risks and side effects — intended and unintended — of these activities on sustainable development."

Critics have in the past raised concerns the BMGF should not have any association with the program due to these apparent conflicts of interest. That's because BMGF also backs GAVI, a global vaccine alliance that counts big pharmaceutical companies as its partners, according to Reuters.

After February 28, the NTAGI will be transitioned to the fully government-funded National Institute of Family Health and Welfare (NIFHW), by order of the Centre.

Of course, private donations from philanthropists are vital to staving off many of the world's economic and medical woes. However, it is when these private donations begin to flow through the easily corrupted bureaucracy that we start seeing a vastly different scenario unfold.

"Gated Development demonstrates that the trend to involve business in addressing poverty and inequality is central to the priorities and funding of the Bill and Melinda Gates Foundation. We argue that this is far from a neutral charitable strategy but instead an ideological commitment to promote neoliberal economic policies and corporate globalisation. Big business is directly benefitting, in particular in the fields of agriculture and health, as a result of the foundation's activities, despite evidence to show that business solutions are not the most effective.

Perhaps what is most striking about the Bill and Melinda Gates Foundation is that despite its aggressive corporate strategy and extraordinary influence across governments, academics and the media, there is an absence of critical voices. Global Justice Now is concerned that the foundation's influence is so pervasive that many actors in international development, which would otherwise critique the policy and practice of the foundation, are unable to speak out independently as a result of its funding and patronage."