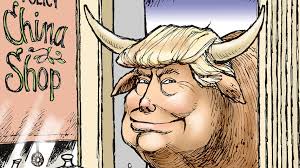 The new administration's knowledge of the region is a thousand miles wide and two inches deep.

Reviving a truly terrible idea originated by know-nothing Congressional Republicans, Trump proposes US-run safe zones in Syria for refugees from that nation's conflict. The president went out of his way to insist that such safe zones would spare the United States from having to shelter Syrian refugees.

He should better worry about Chicago where 762 citizens were murdered last year.

At the same time, Trump, declaiming from his new Mount Olympus of New York's Trump Tower, vowed to impose a 30-day halt on immigrants from Iran, Iraq, Libya, Somalia, Sudan, Syria and Yemen to 'protect the American people from terrorist attacks by foreign nationals.'

One wonders if any of Trump's Praetorian Guard noticed that all these listed 'terrorist' nations have been attacked by the United States or seen their governments overthrown by Uncle Sam.