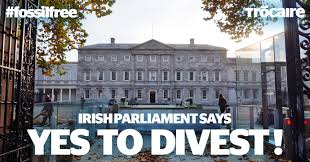 In October of 2015, Sweden pledged to become the first fossil fuel-free nation on the planet. Now, the country that is predominantly known for running out of trash to burn for energy has some competition. Recently, the parliament of Ireland voted to completely divest from fossil fuels. With a majority vote, a "first-of-its-kind fossil fuel divestment legislation" was passed.

350.org's Fossil Free Europe reports that the historic bill passed the parliament's lower house, the Dáil, on January 27th of the new year. Supporters are optimistic that Ireland might now be able to fully divest its sovereign wealth fund, which is worth more than 8 billion Euros (or around $8.5 billion) from oil, gas, and coal.

The event is being heralded as "an important moment in the history of the divestment movement." The next step is for the Fossil Fuel Divestment Bill to go to the Committee stage in the Irish Parliament.

Commented Éamonn Meehan of Trócaire, a key member of parliament:

"With a climate-sceptic recently inaugurated into the White House, this move by elected representatives in Ireland will send out a powerful message. The Irish political system is now finally acknowledging what the overwhelming majority of people already know: That to have a fighting chance to combat catastrophic climate change we must phase out fossil fuels and stop the growth of the industry that is driving this crisis."