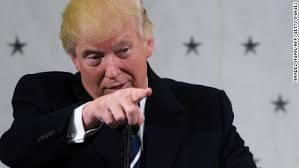 Trump's inconsistent rhetoric left us wondering exactly what kind of foreign policy he would pursue if elected.

The President's inaugural speech was no different. On the one hand it was very encouraging when he said that under his Administration the US would "seek friendship and goodwill with the nations of the world," and that he understands the "right of all nations to put their own interests first." He sounded even better when he said that under Trump the US would "not seek to impose our way of life on anyone, but rather to let it shine as an example. We will shine for everyone to follow." That truly would be a first step toward peace and prosperity.

However in the very next line he promised a worldwide war against not a country, but an ideology, when he said he would, "unite the civilized world against radical Islamic terrorism, which we will eradicate from the face of the Earth." This inconsistent and dangerous hawkishess will not defeat "radical Islamic terrorism," but rather it will increase it. Terrorism is not a place, it is a tactic in reaction to invasion and occupation by outsiders, as Professor Robert Pape explained in his important book, Dying to Win.