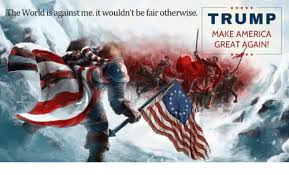 Donald Trump has a problem – he's virtually alone. It isn't just that he strays significantly from his own party's orthodoxy on major foreign policy questions. His conundrum is that even his own cabinet choices very often depart from the Trumpist canon, a fact that may undermine his ability to actually implement his foreign policy vision.

That vision, in my view, involves unpacking the post-WWII international order and updating it to focus on what Trump believes is the twin dangers to US interests: radical Islamic terrorism, as he puts it, and socioeconomic "carnage" on the domestic front. In order to do that, such institutions as NATO – founded when the old Soviet Union was America's main adversary on the world stage – must be retooled, or, if necessary, abandoned, in favor of new alliances and structures designed to meet new threats. In Trump's view, we are stuck in the past, fighting yesterday's wars while our allies drain our resources and our real enemies go about their business undisturbed.

In terms of specifics, what this translates into is a rapprochement with Russia, which will be recruited into a US-led "anti-terrorist" coalition designed, first of all, to fight and destroy ISIS, and perhaps also to contain China short of war.

In an interview with the Times of London and the German newspaper Bild, Trump indicated that he envisions a grand bargain with Vladimir Putin: an end to US sanctions and our aggressive military stance in Europe in exchange for major mutual cuts in our respective nuclear arsenals, perhaps coupled with a Russian guarantee that their "near abroad" is safe from Moscow's designs. Furthermore, Russia would be transformed from an adversary into a partner in our endless "war on terrorism," with Trump essentially farming out much of the work involved in subduing and eliminating the ISIS "Caliphate" to Putin and Syrian strongman Bashar al-Assad. This would eliminate the need for US troops on the ground, reducing our role to air support and perhaps the injection of Special Forces to carry out limited tasks.

The US military and national security bureaucracy is implacably opposed to this: that is the source of the CIA's open hostility to Trump, and the rather crude effort to tie him and his campaign to the Kremlin. Both parties oppose détente – never mind an alliance – with Russia, for any reason whatsoever, although the Trumpian wing of the GOP is moving toward the President on this issue.

Thus we had the spectacle of Marco Rubio demanding that Rex Tillerson condemn Putin as a "war criminal," which the would-be Secretary of State pointedly refused to do. However, in response to relentless hammering, Tillerson agreed that the US should have reacted to the Russian reacquisition of Crimea with "a proportional show of force," arming the Ukrainian coup leaders with "defensive" weapons and otherwise "standing up" to the Russian "menace." Trump, on the other hand, has denied that Ukraine is a vital US interest, and seems likely to reduce if not eliminate US support for Kiev, which was involved in an active effort to deny him the presidency.

The newly-confirmed Secretary of Defense, James "Mad Dog" Mattis, is even worse. Pressed during the hearings to separate himself from Trump, he readily complied:

"Since Yalta, we have a long list of times we've tried to engage positively with Russia. We have a relatively short list of successes in that regard. And I think right now, the most important thing is that we recognize the reality of what we deal with, with Mr. Putin, and we recognize that he is trying to break the North Atlantic alliance, and that we take the steps, the integrated steps, diplomatic, economic and military and the alliance steps, the working with our allies, to defend ourselves where we must."

The invocation of Yalta underscores just how sclerotic the national security bureaucracy has become: they're still living in the cold war era. And you'll note that Mattis never enumerates the "long list" of attempts to come to terms with Russia, although one could recall Ronald Reagan's historic agreement with Mikhail Gorbachev that partially denuclearized Europe and essentially ended the cold war – which is what Trump hopes to achieve or even surpass.