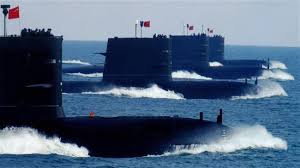 The Standard said Admiral Harris admitted for the first time that the two navies are jointly tracking Chinese naval movements in the Indian Ocean.

To build up India's capability to track submarines, Washington had cleared the sale of Boeing P-8I Poseidon multi-mission maritime aircraft — "the world's most fearsome submarine hunters".

"We work closely with India to improve India's capability to do that kind of Surveillance … I don't want to say too much, but there is sharing of information regarding Chinese maritime movements in the Indian Ocean", admitted the admiral, who refers to Chinese submarines in these waters as "clearly an issue".

Anti-submarine operations are extensively practiced in the Malabar trilateral exercise on the Arabian Sea, which the US, Indian and Japanese navies conduct every year, the paper said.

"That helps us hone our ability to do physical tracking of submarines and ships, and the likes", Admiral Harris told a group of journalists on the sidelines of an international conference in Delhi he attended.