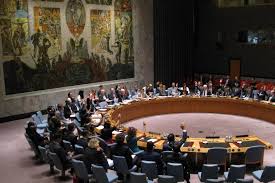 Antonio Guterres was elected the ninth United Nations secretary general by consensus of 193 nations, and with unusual agreement by the United States and Russia. He began work January 1, vowing a "surge for peace" and much-needed reform of the bloated bureaucracy at the U.N, a body that's seen as doing much good, but that's failed in recent years to resolve the world's most intractable conflicts.

On Tuesday, in his first formal appearance as the U.N.'s CEO, he told a packed Security Council chamber, "We must rebalance our approach to peace and security. For decades, this has been dominated by responding to conflict."

The former refugee chief and Portuguese prime minister said the reforms he's setting in motion will be able to "prevent war and sustain peace." And, he said, nations must "strengthen the credibility and authority of the United Nations."

At the same time, because of a December Security Council resolution condemning Israeli West Bank settlements, made possible by the abstention of the outgoing Obama administration, a bipartisan group in Congress is considering cutting the U.S. financial contribution to the U.N. Both the House of Representatives and Senate voted to condemn the Council vote.

Complaints about the U.N., including those by President-elect Trump, are not new, but divisions between Moscow and Washington haven't been as pronounced since the 1970s. That's created stalemates over some of the largest recent conflicts, including those in Syria and Yemen, and undermined the world body's credibility.

During his address, Guterres appeared to acknowledge some of the frustration with the U.N. "If there is something that is shocking in today's world, it is to see such a multiplication of conflicts with dramatic human suffering and the little capacity of the international community to prevent conflicts and to, timely, solve them," he said.

Guterres also appeared to blame many – including members of the press -- for not seeing where the U.N. does succeed, such as with poverty eradication, education, or imposing stinging sanctions on North Korea. "TV cameras are not there where a crisis is avoided," the new Secretary General told reporters on his way into his address.

In a wide ranging one-on-one exit interview with CBS News, now former Secretary General Ban Ki-moon talked about the important role of the U.N. and the International Atomic Energy Agency in counterterrorism: "At a time when we are seeing daily terrorist attacks and the spread of violent extremism, it is important for the international community to make sure that any nuclear material or any weapons should be fully safeguarded so that there will be no smuggling out or smuggling into any country; once nuclear materials are in the hands of a terrorist, it will be extremely difficult and dangerous for international peace and security."

Outgoing U.S. Ambassador to the U.N. Samantha Power, in one of her last addresses to the body, offered similar observations, saying the Security Council matters because 100,000 troops are deployed worldwide under its auspices, and because it authorizes the use of force and delivers life-saving humanitarian aid. Power said, "We help set the rules for how states should behave."

The U.N.'s role today is significant: It has a staff of 44,000, not including 104,000 peacekeeping troops, and is responsible, in theory, for issues from world peace and refugees to pandemics and climate change.