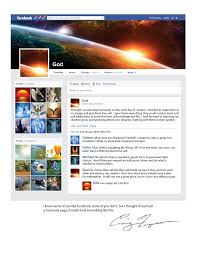 Facebook's notorious censorship — which has included takedowns of iconic images like the Vietnam War's 'Napalm Girl' to the arrest of Rosa Parks to a photograph of a classical statue of Venus — reached a whole other level of absurd recently, when the platform suspended God's account.

God, a religious satire profile, had the nerve to write a post critical of spending priorities of the bellicose United States, stating:

Stop making your military so damn huge and give people medicine and education because you're sick and stupid. Apparently, according to writer Dan Arel, Americans were none-too happy with the critique — the post received such a massive, vitriolic response, algorithms automatically banned God for 30 days.

"FB banned Me for 30 days for having an opinion on military spending," he attempted to explain to followers in a post.

But the "The Good Lord Above" had already lost posting privileges — everywhere on Facebook.

Although the account frequently draws the ire of Facebook users who either view the profile as blasphemous to their religion or disparaging of their country — God often criticizes American imperialism — the suspension over what amounts to an uncomfortable truth speaks to increasingly oppressive censorship.