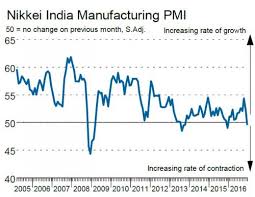 Over 50 days after Indian Prime Minister Narenda Modi stunned India's population when he announced on November 8 he would unexpectedly eliminate 86% of the existing currency in circulation in what was supposed to be a crackdown on the shadow economy, but instead has resulted in a significant hit to the broader, cash-based economy, overnight we noted the first official confirmation of how substantial the impact of Modi's demonetization has been, when the Nikkei India Manufacturing Purchasing Managers Index printed at 49.6 in December, the first contraction reading since December 2015, as the war on cash crippled demand.

According to the report, output and new orders fall for first time in one year; companies reduced buying levels and payroll numbers; Input cost inflation accelerated, while charges rose at softer rate.

Commenting on the report, IHS Markit economist Pollyanna De Lima said that "having held its ground in November following the unexpected withdrawal of 500 and 1,000 bank notes from circulation, India's manufacturing industry slid into contraction at the end of 2016. Shortages of money in the economy steered output and new orders in the wrong direction, thereby interrupting a continuous sequence of growth that had been seen throughout 2016. Cash flow issues among firms also led to reductions in purchasing activity and employment.

Looking at the upcoming timeline of cash exchanges, she noted that "with the window for exchanging notes having closed at the end of December, January data will be key in showing whether the sector will see a quick rebound."

A continued slowdown will strip India of its position as one of the world's fastest-growing big economies and risk a political backlash against Modi. On Wednesday another key economic report is due, when the Service PMI data is due before focus shifts to the government's first official growth estimate for the year through March.