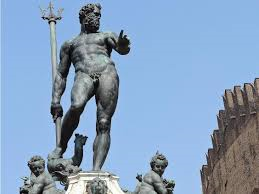 A symbol of the prosperous northern Italy city, it was chosen by Elisa Barbari, a local writer, to illustrate her Facebook page, called "Stories, curiosities and views of Bologna".

But the social media giant objected to the image, which shows a naked Neptune – Nettuno in Italian – holding a large trident. "I wanted to promote my page but it seems that for Facebook the statue is a sexually explicit image that shows off too much flesh. Really, Neptune? This is crazy!" Ms Barbari said.

In a statement, Facebook told her: "The use of the image was not approved because it violates Facebook's guide lines on advertising.

"It presents an image with content that is explicitly sexual and which shows to an excessive degree the body, concentrating unnecessarily on body parts.

"The use of images or video of nude bodies or plunging necklines is not allowed, even if the use is for artistic or educational reasons."