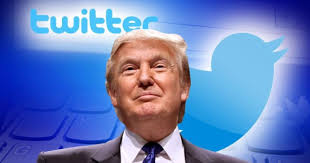 Having drawn the ire of the mainstream press for his extensive use of Twitter in announcing major developments and policy shifts, President-elect Donald Trump will not end the "onslaught" of posts on Twitter that fed his unconventional campaign, even after taking on the formalized duties of the Oval Office later this month, as Bloomberg notes following an announcement by incoming White House press secretary Sean Spicer who said he expects Trump "will boldly use" Twitter to make major policy announcements.

"You know, with all due respect, I think it freaks the mainstream media out that he has this following of over 45 plus million people that follow him on social media, that he can have a direct conversation," Spicer said. "He doesn't have to have it funneled through the media."

Indeed, he doesn't, and the fact that the media suddenly finds itself locked out in this most important of information dissemination and filtration pathways, has unleashed the biggest period of soul-searching for the conventional press in decades.

In recent tweets, Trump has hinted he'd like to change decades of policy on nuclear weapons; praised Russian leader Vladimir Putin even after accusations by intelligence agencies that Russia attempted to tamper with U.S. elections; and said the United Nations is a "club for people to get together, talk and have a good time."

As a result, Trump was scolded by foreign policy experts last month when he used Twitter as the venue to say that the U.S. should greatly strengthen and expand its nuclear capacity until such time as the world comes to its senses regarding nuclear weapons. For now, if anything, this outside criticism has only emboldened Trump to avoid conventional media outlets.

On Dec. 28, the incoming president tweeted that he was trying to disregard statements by President Barack Obama that he considered "inflammatory." "Thought it was going to be a smooth transition - NOT!" Trump said in the post.

After Putin said on Dec. 30 that he wouldn't respond in kind to an Obama administration order expelling 35 Russian diplomats in response to that government's hacking of Democratic Party officials, Trump tweeted: "Great move on delay (by V. Putin) - I always knew he was very smart!"

A day after praising Putin, Trump raised eyebrows by wishing a "Happy New Year to all, including to my many enemies." New Year's Day brought a more conciliatory greeting "to all Americans" that cast ahead to "a wonderful & prosperous 2017 as we work together."

A Plea to the Left: Joe Biden Will Not Save You

Dershowitz and Rep. Jim Jordan Call for Americans to Fight Back Against Left's 'Cancel Cultu

Dershowitz and Rep. Jim Jordan Call for Americans to Fight Back Against Left's 'Cancel Cultu

Analysis: The end of the road for Lou Dobbs

CNN's Ratings Are Down HUGE Numbers In First Week After Trump, Who Could Have Predicted This??