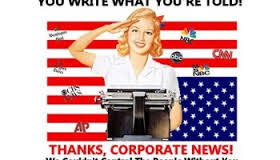 While print media's failure is largely attributed to technological shifts that have changed consumers' media consumption behaviors, we would argue that biased reporting and a complete lack of journalistic integrity at many "real news" outlets facilitated the decline.  The American population has rejected the notion of paying for "journalistic integrity" only to get hyper-partisan, leftist, manufactured narratives in return.

That said, Mark Thompson, the President and CEO of the New York Times, is convinced that Silicon Valley's social media and search giants are to blame for failing print newspapers around the country.  And, like any good liberal, Thompson's first reflex to fix failing businesses is to provide subsidies...and apparently he thinks the tech titans should pay those subsidies.

But we also know that here in Detroit and almost every other city in America, many of our colleagues – who do not have the national and international opportunity of The Times, or our successful digital subscription model – are having a much harder time. Their ability to deliver real news – about city hall and the state legislature, about local schools and businesses, as well as about America and the world – is under direct economic threat.