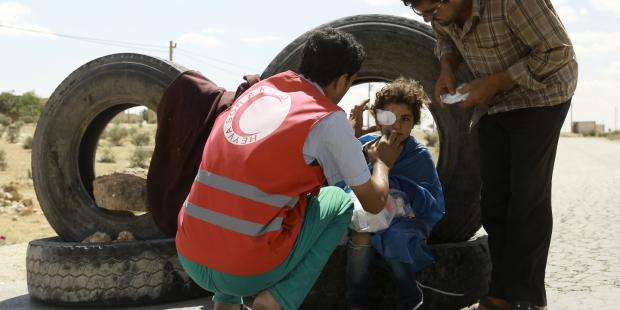 Two seemingly unrelated stories in the New York Times yesterday serve as potent reminders of the deadly and disastrous consequences of US interventionism in the Middle East. The stories involve Iran and Libya.

Referring to Donald Trump's campaign vow to tear up the nuclear agreement entered into last year between the United States and Iran, Iran's president, Hassan Rouhani, told an audience at Tehran University, "America cannot influence our determination, this nation's resistance and its struggle. America is our enemy; we have no doubt about this. The Americans want to put as much pressure on us as they can." During the talk, the student audience chanted, "Death to America."

Rouhani is especially chagrined at what he perceives to be a double cross by US officials, who have continued their regime of brutal sanctions against Iran notwithstanding Iran's signing of the nuclear agreement.

What's important to realize, however, is that the bad relations between the United States and Iran are rooted in US interventionism, specifically the CIA's violent coup in 1953, which succeeded in destroying Iran's experiment with democracy.

The Iranian parliament had elected a prime minister named Mohammad Mossadegh, who was later selected as Time magazine's Man of the Year. Mossadegh, believing that Iran's oil belonged to the Iranian people and not to British or other foreign firms, proceeded to nationalize the country's oil industry. British officials prevailed on the CIA to oust Mossadegh in a coup, which the CIA proceeded to do, replacing him with the Shah of Iran, who then restored British oil rights.

In order to fortify the Shah's hold on power, the CIA proceeded to train his secret national police-intelligence force in the arts of indefinite detention, torture, and surveillance. Under the tutelage and with the full support of the CIA, the Shah's regime, which was always unelected, became one of the most tyrannical regimes in the world.

That's what brought about the 1979 Iranian revolution. That's what people who are suffering under extreme tyranny sometimes do — they revolt, violently. Needless to say, many Iranians were angry not just at the Shah, but also by his enabler and supporter, the US government.

Unfortunately, the Iranian people were unable to restore the democratic system that the CIA had destroyed 20 years before. The result of the 1979 revolution was another tyrannical regime, one based on religion.

Relations between Iran and the United States have been horrible ever since. What is important to recognize is that those bad relations are rooted in the 1953 intervention and that it is the US government that is ultimately responsible for what its coup ended up bringing in Iran.