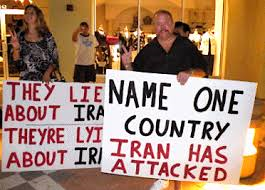 Iran, which has closed important nuclear facilities, shut down half its centrifuges, and neutralized its stores of nuclear material under the international agreement, must be wondering if it's nuclear deal was not really, really disastrous.

In his rush to condemn the Iran deal, Donald Trump seems to be forgetting that the pact was co-signed by Britain, France, Russia, China, Germany and the UN. Backing out of the pact will be no easy matter and sure to provoke a diplomatic storm.

The outgoing CIA director, John Brennan, calls Trump's plan to junk the Iran deal 'the height of folly.' Brennan warns that doing so would further destabilize the Mideast and embolden hard-liners on all sides. He could have added that if Iran resumes nuclear enrichment, Israel's far right government will likely go to war with Iran in order to preserve its Mideast nuclear monopoly.

An Israeli attack on Iran could quickly drag in the United States and become a major Mideast conflict. The Pentagon is not anxious to get involved in yet another war in the Muslim world.