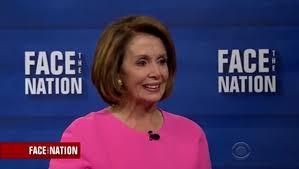 The California congressman appeared on CBS's "Face the Nation" Sunday and instead said the issue facing Democrats is simply a failure of communication.

DICKERSON: "The Democratic Party is in a moment of questioning about its identity. You were reelected to lead the Democrats in the House. What do you tell Democrats who want a new direction and then, go to you, what are you going to do differently?"
PELOSI: "Well, I don't think people want a new direction. Our values unify us and our values are about supporting America's working families. That's one that everyone is in agreement on. What we want is a better connection of our message to working families in our country, and that clearly in the election showed that that message wasn't coming through. But we are united in terms of the security of our country, which is our first responsibility. To be smart and strong and not reckless in how we protect the American people, strong in how we protect our economy."