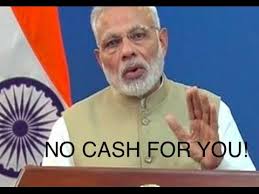 Well, who could have seen this coming? Just as we noted, the slippery slope towards full government control in a cash-less society is where Indian PM Modi is heading following his chaos-creating demonetization efforts of the last two weeks. While massive opposition protests are planned tomorrow, Modi remains indignant, as Reuters reports, "we can gradually move from a less-cash society to a cashless society…this is the chance for you to enter the digital world."

Modi, speaking in his monthly address on national radio, said the government understands that millions have been affected by the ban on 500-rupee and 1000-rupees notes, but defended the action.

"I want to tell my small merchant brothers and sisters, this is the chance for you to enter the digital world,"Modi said speaking in Hindi, urging them to use mobile banking applications and credit-card swipe machines.