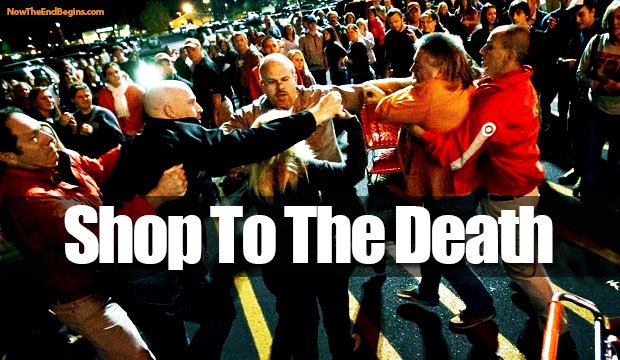 Murica, USA — Before their Thanksgiving dinners could settle, many Americans left their family atmospheres and descended upon department stores and big box retailers across the country to partake in rampant and apparently violent Black Friday consumerism.

Mindless shoppers aren't even getting the great discounts they cherish since retailers artificially inflate prices of goods in the months before the sales in order to make the subsequent discounts look good in comparison. Also, even if shoppers do manage to grab some genuine discounts, they will invariably buy another product that has a 98 percent markup value.

If we take a step back to observe this downright insanity, it is getting difficult to differentiate between Frank Darabont's Walking Dead and Black Friday shoppers.

As the shopping began late Thursday night, so did the disgusting display savagery and greed.

Immediately after listing how thankful they were for everything in their lives, people fled to the store to fill their lives with more things. So far, two people have been killed and countless videos are popping up of consumers shoving, hitting, and knocking each other over — to get a bargain.

A 20-year-old New Jersey man was shot and killed around 1 a.m. at Hamilton Mall in Mays Landing, in the parking lot next to Macy's, the Press of Atlantic City reported.

Then, in Reno, NV, an unknown man was killing in a Wal-Mart parking lot. Police said the unidentified victim was gunned down at 6:05 p.m. in a driveway leading up to the superstore, KOLO TV reported. The gunman and his victim were fighting over a parking spot, officials said.

Video from a Walmart in Bainbridge, Georgia shows shoppers fighting to grab every last towel from the display.

Meanwhile, in Houston, Texas, shoppers raged over a $99 toy convertible for children.