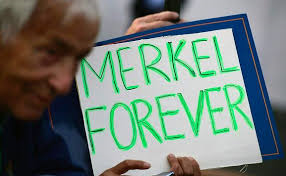 After months of feverish speculation, Merkel announced at a meeting with other leaders of her conservative Christian Democrats (CDU) that she would run for a fourth term, a decision they met with thunderous applause, party sources told AFP.

Merkel, 62, has governed Europe's top economic power, which does not have term limits, since 2005. She is due to hold a news conference at 1800 GMT Sunday.

Another full four-year mandate, which pollsters say she is likely to win, would tie the post-war record set by her mentor Helmut Kohl, who presided over the 1989 fall of the Berlin Wall.

Merkel told the meeting she had struggled to make up her mind, the sources said, but concluded that Germany needed a strong CDU, which has no clear successor to the woman who has led the party since 2000.

She added that next year's campaign would "not be a cakewalk".