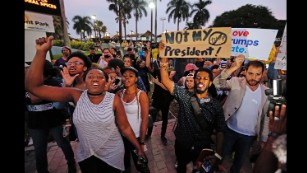 "I am so saddened to hear that," Trump told CBS' Lesley Stahl on "60 Minutes" when she said Latinos and Muslims are facing harassment. "And I say, 'Stop it.' If it -- if it helps, I will say this, and I will say right to the cameras: 'Stop it.'"

Trump directed his comments to his own supporters whom Stahl said have written racist slogans or chanted degrading messages -- particularly in schools. It was a powerful appeal to a nation ripped apart by the divisive 2016 campaign. Trump's election has left Democrats angry and many minorities fearful about the future.

Yet Trump also criticized the protests that have broken out in cities across the United States since his defeat of Hillary Clinton on Tuesday.

Trump said he's seen "a very small amount" -- including "one or two instances" -- of racial slurs being directed at minorities, particularly in largely white schools, since his election.

"I would say don't do it, that's terrible, because I'm going to bring this country together," Trump said.

Richard Cohen, President of the Southern Poverty Law Canter told CNN's "New Day" on Monday that there have been more that 300 incidents that their organization has recorded.