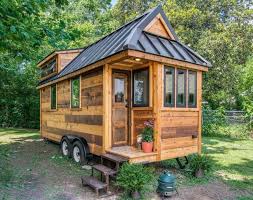 As the corporatocracy tightens its grip on the masses – finding ever more ways to funnel wealth to the top – humanity responds in a number of ways, including the rising popularity of tiny houses.

These dwellings, typically defined as less than 500 square feet, are a way for people to break free of mortgages, taxes, utility bills and the general trappings of "stuff." They're especially attractive to millennials and retirees, or those seeking to live off-grid.

But government and corporations depend on rampant consumerism and people being connected to the grid.

Seeking actual freedom through minimalist living should seem like a natural fit for the American dream, but the reality is that many governments around the country either ban tiny homes or force them to be connected to the utility grid.

"As of now, few cities allow stand-alone tiny houses. Most communities have minimum square footage requirements for single-family homes mandating that smaller dwellings be an "accessory" to a larger, traditional house. Many also have rules requiring that dwellings be hooked up to utilities, which is a problem for tiny-house enthusiasts who want to live off the grid by using alternative energy sources such as solar panels and rainwater catchment systems."

Some of the more recent examples of explicit bans include Etowah, TN and Wasilla, AK, which don't allow homes less than 600 square feet and 700 square feet, respectively.

Lawmakers spout slippery slope fallacies, saying that allowing tiny homes will lead to decay and "unsightly little cabins plunked down next to traditional homes." Using government force to stamp out societal change in response to financial factors is this councilman's idea of conservatism.

Granted, some cities are actually encouraging tiny homes as a means of freedom or as a solution to homelessness, as in Detroit, MI. Some Los Angeles lawmakers don't see it that way, calling tiny homes for the homeless "a threat in many ways to our public safety."

Wasilla residents are baffled by the tiny home ban, which seems to run contrary to Alaska's wild and free nature. Tundra Tiny Houses is leading a new market of small home construction using renewable energy, and now they'll have to tell customers Wasilla is not an option, in addition to Anchorage to Eagle River.

US Household Wealth Hits A Record High After Biggest Quarterly Jump on Record...