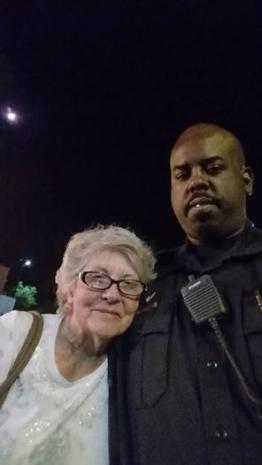 Instead of ticketing a tired, elderly lady who hadn't eaten for hours, this officer bought her dinner to fulfill his oath to "serve and protect".

It's important now more than ever that media remains objective on the reporting of officer conduct in the United States. Because police brutality is a pressing issue, it's receiving widespread attention – particularly from alternative media sources. And while this is essential in order to expose the flaws within the system so they might be fixed, it's important, as well, to not  ignore the positive deeds that are being conducted by officers every day.

One example of this concerns a policeman named Emanuel Dotch. As the Alabama-resident wrote on his Facebook page, he was driving towards Florida on Interstate 10 when he noticed a car in front of him driving sporadically. Reportedly, the driver almost side-swiped a truck, which is why Emanuel pulled them over.

To inspire a much-needed break and help her regain some mental stamina, he accompanied her to a nearby Waffle House. After paying for her meal, the officer waited in his car for her to finish.

"She walked out and tried to offer me some money, but I told her I couldn't accept that because it's apart of my job to protect and serve so she asked me would I accept a hug and I told her I would do that. The moral of the story is if we would just look out for each other, this would be a better country."